Planning has always been a hallmark of Peachtree City. Now that the City is 60 years old, many of the original commercial and office properties are aging.  Rather than leaving these historical centers in a state of disrepair, some of them will undergo redevelopment in the coming years. Redevelopment and quality infill projects protect the property values here in our City and discourages sprawl across the rural landscapes of Fayette County. Learn more about what Peachtree City is doing to plan for our next 60 years:

In 2018 the City was approached multiple times by commercial property owners interested in redeveloping their shopping centers near City Hall. Rather than reacting to individual requests, the Mayor and City Council sought a local planning firm to collaborate with the property owners to create a Redevelopment Vision around City Hall and the historical Aberdeen Village commercial center. In October 2018, they released a Conceptual Vision that imagined what a Walkable Village could look like: 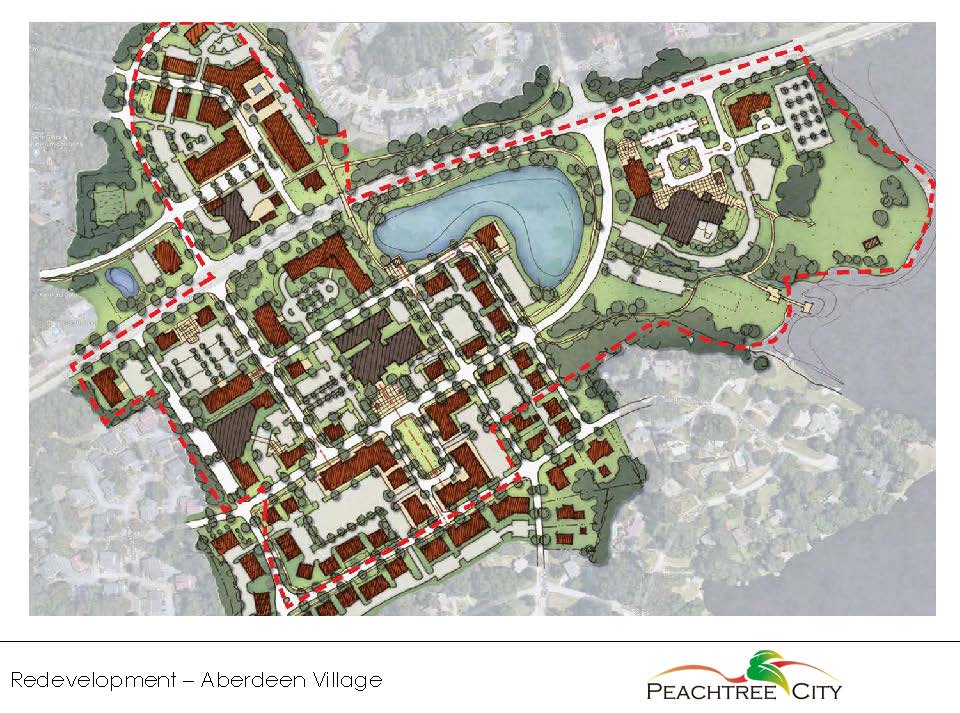 If pursued, the Conceptual Vision would be implemented over time by private land owners who want to redevelop their property. In the interim, the City of Peachtree City is planning for eventual redevelopment of this area in the following ways:

The City has hired a traffic consultant to study the impacts of the Conceptual Vision and all anticipated development on SR 54 from the SR 54/ SR 74 intersection to SR 54/ Ebenezer Road intersection.

The City has been awarded a Livable Centers Initiative (LCI) grant by the Atlanta Regional Commission. The study area has been enlarged to include the State Route 74 and 54 intersection and the greater Aberdeen Village. The LCI project will include:

The City has already explored tools available to encourage private investment in areas that will be ready for redevelopment in the coming years.  From Community Improvement Districts, to Assessment Districts, and Zoning Code updates.